Representations of cryptocurrencies are pictured on January 24, 2022. (Photo: Reuters)

SCB X Group’s planned investment in crypto exchange Bitkub Capital Group Holdings has been called off, amid uncertainty over Bitkub’s resolution of regulatory issues with the Securities and Exchange Commission (SEC).

On Thursday, SCB X filed a statement with the Stock Exchange of Thailand (SET) stating that its trading group and Bitkub Capital had mutually agreed to terminate the investment plan.

In November last year, the board of directors of SCB Securities Co (SCBS), a subsidiary of SCB X, approved the acquisition of 51% of the shares of Bitkub Online Co (Bitkub) from Bitkub Capital, the transaction being valued at approximately 17.85 billion baht.

Over the past few months, due diligence has been conducted on Bitkub.

During the due diligence, SCB X and SCBS said that they recognized the potential and talent of the Bitkub Group and saw many opportunities for cooperation in various fields to develop and improve business operations.

SCB X said that although the results of the due diligence revealed no major concerns, Bitkub is still dealing with various issues, as recommended by the SEC, with an uncertain timeframe for resolution. 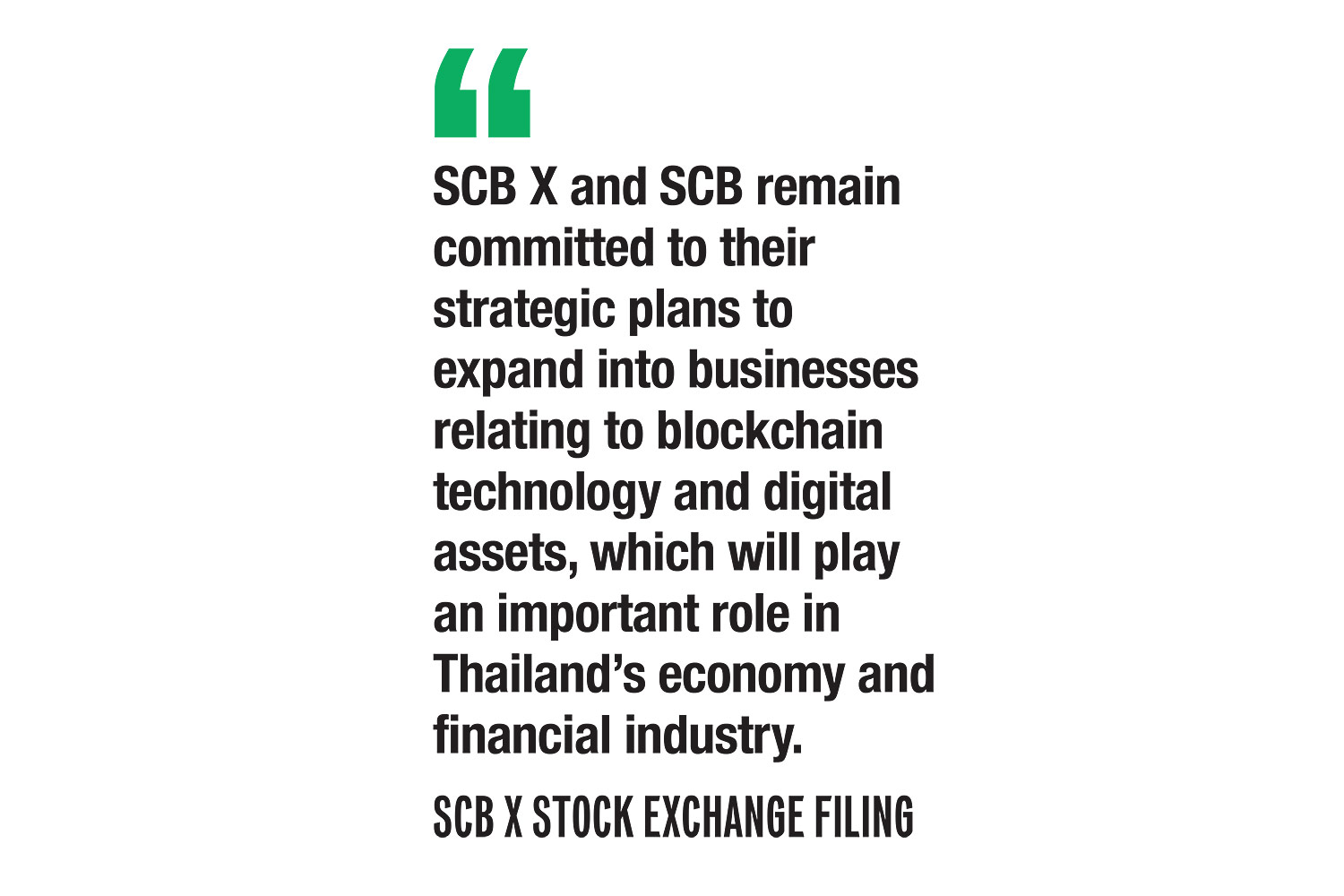 On Thursday, the SCBS board of directors passed a resolution allowing the company to terminate the agreement.

“SCB X and SCB remain committed to their strategic plans to expand into businesses related to blockchain technology and digital assets, which will play an important role in Thailand’s economy and financial sector,” according to the filing Thursday by SCB X with the SET.

Last month, the SEC ordered Bitkub to review the process of listing KUB coin on its exchange.

Jirayut Spupsrisopa, founder of Bitkub Capital, posted on his Facebook page that the decision to end the investment plan was the best solution at the moment.

He said Bitkub remains an organization for the future. As director and leader of the company, Mr. Jirayut said he and his team believe they could make history by becoming a Thai national champion, supporting the country’s economy in the future. future and by becoming a regional financial and technological centre.

Bitkub said in a statement that given its delay in resolving unresolved issues with the SEC, which could delay the transaction with SCBS, it agreed to drop the transaction.

Bitkub said it was confident that its business and operations would not be affected by the termination of this transaction, as it remained a leader in digital asset trading in Thailand, with sufficient resources to continue its activities in accordance with its planes.

Poramin Insom, the founder of Satang Corporation, a cryptocurrency exchange operator, believed that the deal fell through for a number of reasons, including changing crypto market conditions.

From a very active market in 2021, the crypto market has collapsed this year, with a sharp drop in turnover.

Additionally, he said the deal likely fell through due to pricing issues.

When SCB X announced its intention to buy 51% of Bitkub, it pushed the price of KUB coin to 580 baht, as the deal would have helped Bitkub to significantly expand its digital asset business, such as the development of the blockchain technology in partnership with others.

However, the competition in the crypto market is quite high, with many newcomers. Gulf Energy Development recently announced a partnership with Binance, the world’s largest crypto exchange.

Suppakrit Boonsat, chairman of the Thai Digital Asset Association, said he thinks the crypto market will be very competitive in Thailand due to the emergence of new players, but they will have to come up with new products.

BRI and the EU investment plan for Africa: a critical analysis The geopolitical OBSESSION has once again compelled the European Union (EU) to invest in the African continent to compete with the Chinese BRI. China’s US-sponsored and plotted containment policy has now been hijacked and extended even to African countries. In this regard, the so-called […]

Airbus could create around 500 more jobs as part of plans to increase production at its wing manufacturing plant in North Wales. The A320 aircraft production ramp-up plan was confirmed in the first quarter 2022 results. The aerospace giant announced that its consolidated revenues increased by 15% to reach 12 billion euros and its consolidated […]

(Business in Cameroon) – Cameroon has integrated gender issues into its forestry investment plan. This was announced following a workshop co-organized by the African Development Fund (AfDB), the Climate Investment Fund (financed by the AfDB and the World Bank) and the Cameroonian Ministry of Environment in Ebolowa, in the south of the country. “The validation […]